This is a topic that I've covered on The Red Camel's FaceBook page, but it's worth repeating because I think its a good tool for those that make or embellish their own tribal costumes.

Using coins to decorate your dance costumes is quick and easy. Coins add shine, sometimes a bit of noise and are the original tribal decoration! Coins can have loops that thread either from front to back or side to side, or simply have holes drilled through. Most coins used for belly dance costumes are either newly made reproductions (easily told by the light weight), or are real Indian or middle eastern coins, usually Pakistani, Afghani or Persian. Real coins can generally be told by the older patina and heavier feel. Moroccan coins are seen less often, and some of these are small and lightweight, but most are larger and look and feel like 'real' coins. There are also other real and reproduction coins available. Any of these can be used for costuming and methods for attaching are generally the same for all.

Coins with drilled holes can be sewn directly to your costume. If you want to use jump rings, you can attach them to chain or some kind of cord and either sew the chain/cord down for a nice even row, or let it drape over the belly or swag around the hips.

Middle Eastern coins are the most plentiful for costuming and have wide loops soldered to them that thread from side to side. Indian coins can have wide, side-to-side loops or can have smaller loops that thread front to back. The smaller front-to-back loops can be sewn directly to your costuming piece with relative ease. The loops are small enough that the coins don't move around too much and will stay in place fairly well.

Coins with wide side-to-side loops are better off strung on a cord of some type to help keep them in place when they are attached and thus give a more consistent look. Sometimes you can find coins that have been removed from old clothing and decorative items that are still on their original cords. The added bonus of this is that these coins are usually all the same size and shape and are already spaced out fairly evenly along the cord. Most old cords are either rolled fabric or are a flat braided cord, sometimes consisting of two or three separate strands sewn together.

These are a breeze to just sew directly to your costume. The cords can be cut to any length, generally without having to worry that they will come undone. Just giving it a few stitches along the end is enough to keep them from unraveling. If the cords aren't the right color, try throwing them into a pot with some RIT dye!

Coins with wide loops that have already been removed from their original cords can easily be restrung. The easiest way I have found to do this is to braid some yarn and run it through the loops. The best yarn to use is the cheap stuff from a craft store. Added plus, it comes in every color! Use 6 pieces of yarn, 2 in each strand, to make a cord that fills the loops and holds the coins in place well. Make the braid a little bit longer than you need for your project. Then take a piece of scotch tape and roll it around the loose ends, like a shoelace end. This will easily pass through the loops on the coins and prevent the braid from coming undone. After your coins are strung, sew the cord down, evenly spacing the coins. Don't forget to cut off the tape and secure the ends of your braids well so they don't fray.

For an interesting variation, try alternating large and small coins in a row or making a pattern with various sizes and shapes.

That's just about everything you need to know about using coins. They're a super easy way to add tribal decoration to your costumes!

You can find real coins for tribal bellydance costuming here at The Red Camel's website.
Posted by The Red Camel at 2:14 PM No comments:

What's so Fun About Tribal Jewelry?

You mean apart from wearing it and feeling like you're connected to a tradition much much older than yourself? Well, for me the most fun is hunting for those old authentic well-loved pieces. The ones that are worn smooth from being touched many times, either because they are a much-loved family treasure, handed down from mother to daughter, or rubbed for protection against evil forces or simply for luck. The ones that are well made, well designed and lovely both to look at and to wear. The ones that have meaning in every detail. There is nothing quite like the feel of old tribal silvery jewelry under your fingers.

My love affair with tribal jewelry began when I was still pretty new to belly dance. I danced with a troupe that was mostly cabaret style ('sparkly girls' for those who are unfamiliar with the term) instead of tribal. But I began to really love this jewelry when we danced at ren faires and I was free to wear tribal jewelry and incorporate those elements into my costuming. I loved hunting down just the right pieces and making something very special out of them.

So as I continued to dance I continued to look for these pieces everywhere I went. Thrift stores, flea markets, estate sales, around town, on vacation - wherever my destination was. I loved finding these beautiful items so much that my house soon abounded with them and it was time to do something about it. That's how The Red Camel was born.

Now I still get to shop for that perfect piece of tribal jewelry. Anywhere. Everywhere! And I still have a spare bedroom. Although I must confess that I do keep some of the very best pieces for myself. But I can't keep it all and you may be the next lucky benefactor of my delight in rooting these pieces out of their secretive hiding spaces.

See what I've found here: www.redcamel.net
Posted by The Red Camel at 2:18 PM No comments: 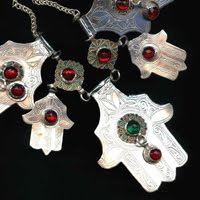